The Viola Sportsmans Club has an active trap community. We start the trap season early spring (weather permitting) and ends late October. League opportunities are available if you're the competitive type. During the active season, trap is held Monday nights starting around 5PM. We hope to see you there! 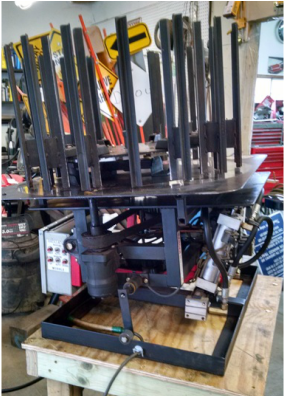 Thanks to member support, the club has made the decision to invest in a new trap thrower! It will be replacing a Western Hand Trap from the early 1970's. Over the years we have been struggling to keep that old Western throwing, and was unlikely to survive this year's trap season. It also created safety concerns for the pigeon setter, as you had to place each clay pigeon on it separately.

Thankfully we came across our new trap. It's a refurbished Pat Trap from 2003. This trap is considered to be the "Cadillac" of trap throwers, with it's max capacity being 540 clay pigeons! It also has the ability to throw doubles' which throws 2 pigeons, at the same time! It can also apply a wobble, which changes the elevation of the pigeon, making it more of a challenge for the shooter.

Hopefully this new addition to the trap range will make the trap shooting experience more fun and exciting for trap shooters of all ages! We hope to see you at the range!